Last year, Shawn “Jay-Z” Carter boasted about turning down an opportunity to perform on one of the biggest and most coveted stages in the world: The Super Bowl halftime show.

“I said no to the Super Bowl. You need me, I don’t need you. Every night we in the end zone, tell the NFL we in stadiums, too,” rapped the hip hop billionaire on “Apes—t.”

Now, after suffering from low ratings in recent years and failing to get Cardi B and Rihanna to reportedly take the stage at Super Bowl LIII, the National Football League is turning to Carter for much-needed help.

On Wednesday, the NFL announced a long-term partnership with Roc Nation, Carter’s sports and entertainment agency, as the league’s official Live Music Entertainment Strategists. The partnership, which goes into effect at the start of the 2019-20 season, will serve to strengthen community through music and the NFL’s Inspire Change initiative. This is bigger than “music and sports; it’s about unifying America,” said NFL Commissioner Roger Goodell at an intimate press event held at Roc Nation’s New York City headquarters.

For Carter, who has been vocal in supporting Colin Kaepernick’s #TakeAKnee protest and the need for criminal justice reform, collaborating with the NFL is the next step in affecting change. “I think we past kneeling. I think it’s time to go into actionable items,” he told reporters. 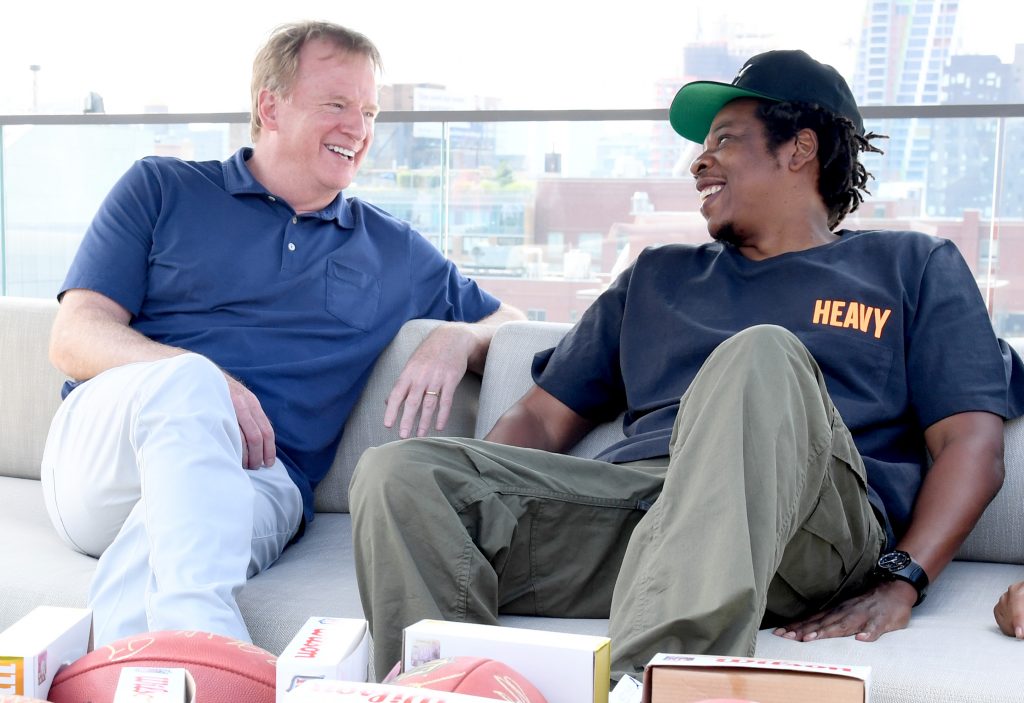 A core component of the partnership and the Inspire Change initiative will be to support causes identified by NFL players like education, economic advancement, improving police-community relations, and criminal justice reform, states a press release. Roc Nation will also spearhead the selection of artists for the Super Bowl and other high-profile NFL performances in addition to assisting in the production and promotion of new music.

Carter said he agreed to partner with the league in order to change the issues that #TakeAKnee amplified. “The first thing I said to Roger was, ‘If this is about me performing at Super Bowl, then we could just end this conversation now. It has to be a bigger platform than that,’” he said, recalling one of the ongoing conversations he’s had with Goodell throughout the year.

During the Q&A portion of the event, syndicated radio host Charlemagne Tha God immediately addressed the elephant in the room. “I think the biggest issue people have is that they want to know how you could partner with the league on social justice when Colin Kaepernick, who is teaching the masses about peacefully protesting, is still out of a job,” he said to Carter.

“I think that we forget that Colin’s whole thing was to bring attention to injustice,” answered the rap icon. “There’s two parts of a protest, you go outside and you protest and then the company or the individual says, ‘I hear you. What do we do next?’ So, for me, that was [taking] action.” Carter also cautioned that we “should not get stuck on Colin not having a job” in light of the impact he aims to make through the new partnership. 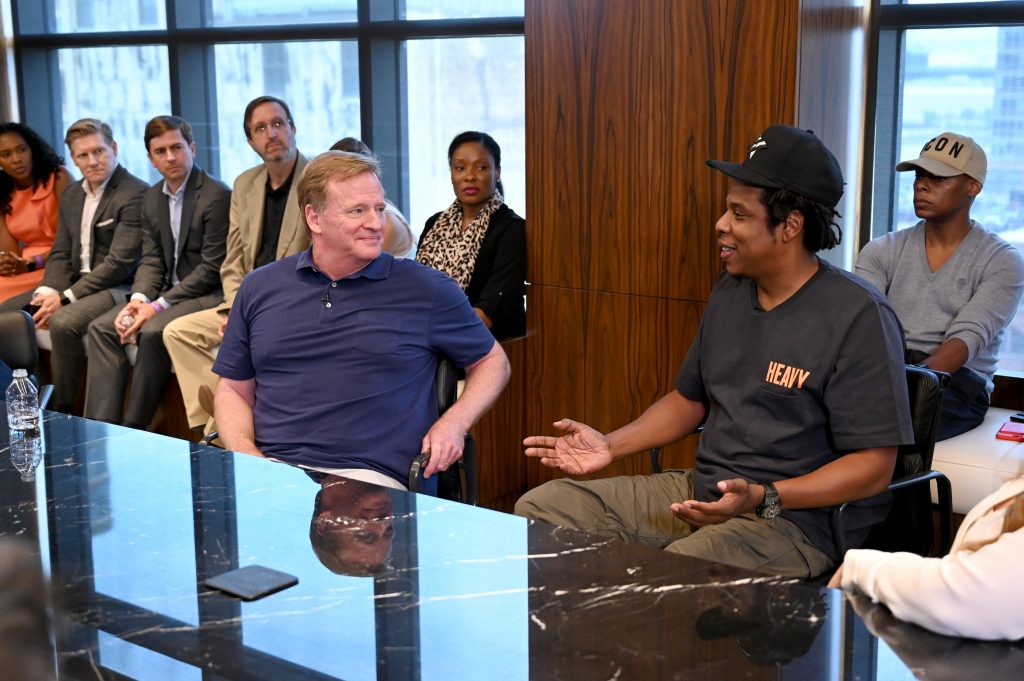 When pressed about allegations that Kaepernick has been blackballed from the league, Goodell replied that the NFL is focused on making changes. “We listened to our players. We understood what our players are saying. And we created a platform for which to help drive change in the communities,” he said. “This partnership, in addition to the entertainment aspect and bringing football and music together, is going to help us make even greater change. And we call it ‘protest to progress.’ We need to make progress.”

The commissioner went on to emphasize the need to do the work to address the issues that triggered #TakeAKnee back in 2016. “I think what the players want to focus on [is] the work in their communities,” he said. “Maybe they did the protest to bring attention to that. Now they want to get to the hard work of helping shape progress.” Goodell, however, did not confirm whether or not the league plans to reinforce its notorious anthem policy, which suspended players for taking a knee during the National Anthem.

The hip hop mogul asserted that he and Kaepernick had a conversation about the new deal, without disclosing details.

However, when asked why Kaepernick was not involved in the Roc Nation-NFL deal, Carter said, “You’d have to ask him. I’m not his boss. I can’t just bring him into something. That’s for him to say.”

Despite Carter’s claim that the Roc Nation and NFL partnership is a “success” and part of the evolution of Kaepernick’s movement, critics slammed the deal on social media when it was first announced Tuesday. “You’ve been raising the consciousness of this country for decades. Why do you feel like partnering with the NFL will further your mission to inspire rather than doing what you’ve been doing, which seems to be speaking out against it?”

“People have to evolve, and people have to want to be better,” Carter replied. “I believe real changes [are accomplished] through real conversation and real work. And what better way to do it, then where the conversation first took place.”

Now that’s a true Mogul! His billionaire status will surely go up from here!

This is how you seriously create change!

Stand up for yourself.